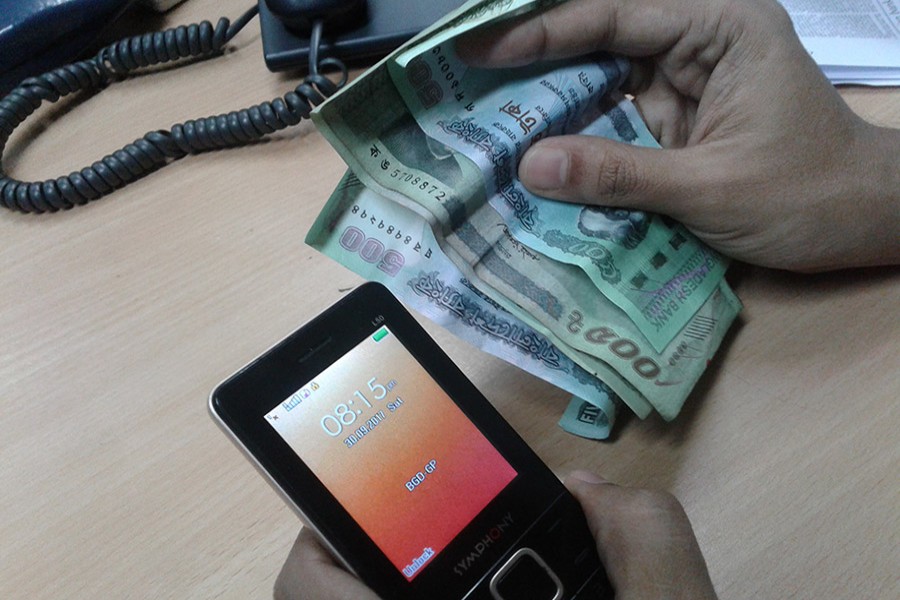 Fast-growing mobile-based financial transactions took a knock, dropping around 5.04 per cent, quarter on quarter, during the third quartile of this year.

Sources concerned, however, attributed the downturn largely to 'seasonal effects'.

According to the figures from Bangladesh Bank, a total of 475.67 million mobile-based transactions took place in the country during the July-September period of this year, the total value of which was 771.01 billion.

This represents a decline by around Tk 41 billion in the total amount of MFS transactions from the second quarter of this year, when a total of Tk 812.01 billion was transacted through MFS channels.

When contacted, industry-insiders claimed the trend is largely an aftereffect of two Eids, as the religious festivals usually see a sudden month-to-month fluctuation in MFS transactions.

"Usually, the mobile-based transaction reaches its peak just before the Eid when people receive their salary along with bonuses. This is also the time when they send their money back home in large amounts through MFS channels," said Shamsuddin Haider Dalim, head of corporate communications of bKash, country's leading MFS provider.

"However, this Eid influx in MFS is usually followed by ebb in the following months when mobile-based transaction sees a temporary slowdown compared to the pre-Eid period," Mr Dalim added.

A deeper look into the MFS data supports such claims. Because, when analyzed on a month-to-month basis, it was found that one of major declines in MFS transaction came in July, immediately after the Eid-ul-Fitr which was observed in the last week of June.

During that one single month (July), MFS transactions dropped deeper by 22 per cent.
Although the mobile-based transactions soared by a robust 32.72 per cent immediately in the following month of August, it again dropped by a massive 33 per cent during September.

Eid-ul-Azha was observed at the very beginning of September this year, and consequently, most of the Eid-related transactions took place in August.

Records from previous years also support the claim on such seasonal seesaw effects. Notably, the third quarter of last year, which also coincided with two major Eids, saw a 4.0 per cent quarterly decline in MFS transaction.

Meanwhile, in September, the largest decline in terms of mobile-based transactions came in terms of government payment (77.53 per cent). Apart from that, there was a 74.07 per cent drop in salary disbursement and 37.03 per cent decline in inward remittance.

According to the latest figures, there are around 57.73 million registered MFS clients and more than30 million active MFS accounts in the country. The number of MFS agents in the country had stood at 773,283 by the end of September.