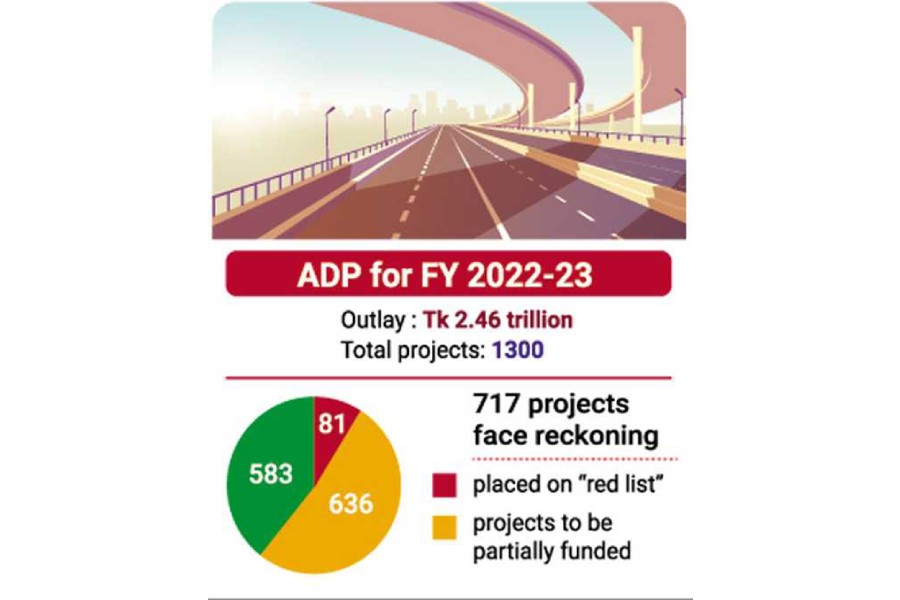 More than half of the ongoing development projects face implementation setback as the government has restricted funding to mitigate macroeconomic worries, insiders say, as a global financial crunch upends normal plans worldwide.

They say as many as 717 out of nearly 1300 projects in the annual development programme (ADP) of the current fiscal year (FY) 2022-23 have been listed for funding postponement or receiving lesser money than their budget allocations.

According to the Planning Commission (PC), 81 projects have been placed on 'red list' as funding those will be stopped in the current fiscal under the belt-tightening actions.

Besides, 636 projects will be partially funded against their annual allocations under the development budget.

The National Economic Council in June in the last fiscal year approved a Tk 2.46 trillion worth of ADP for the FY2022-23 for the execution of some 1300 projects to advance Bangladesh's overall development in its stride for becoming a higher-income country.

The finance ministry has gone for tightening belt suspending fund release for less-priority projects under the ADP as a cost-cutting measure amid the global financial flu caused by the Covid-19 flu and the war in the food-and fuel hub that has already sent some countries into the red.

The Ministry of Finance (MoF) issued on July 3 a circular asking the Planning Ministry to categorise the ongoing development projects into three-A, B and C-based on their priority and importance.

According to the circular, implementation of the 'A'-category projects will continue "on priority basis" while the 'B'-category ones will get only up to 75 per cent of funds, keeping 25-percent government part unspent.

"The funds release for 'C'- category projects will be postponed for indefinite period as those are less important," the circular reads.

Based on the finance ministry's circular, the PC has placed the ongoing 1300 projects in the three categories considering their importance and priorities.

"We have enlisted the projects in three categories based on the priority and urgency. Since the government has adopted austerity in public spending, it is imperative for the  country," a member at the Planning Commission said Saturday. "Some of the projects are taken in a hurry or on political considerations notwithstanding their incomplete feasibility and less importance. So, we have strictly scrutinized those projects during categorizing," he told the FE, requesting anonymity.

However, he said, if any projects in the "B" and "C" categories could be proved important at a particular moment that could come onto the green list ("A") from the red list ("C") or from the yellow list ("B").

Meanwhile, the PC has kept open nine fast-track projects for funding, without placing those under any of the categories.

Some officials at different ministries and agencies told the FE that they were facing colour blows as some of their projects are enlisted in "B" and "C" categories.

"A couple of projects in ministry are very important for implementation. But those have been enlisted in the C category. We are now trying to convince the Finance Ministry to get funds for their smooth implementation," an official at water resources ministry told the FE.

Former Planning Secretary Pradip Ranjan Chakraborty says amid the global economic shocks, the government has taken early measures to tackle any possible shocks on the country.

"The projects are categorized on need- and result-based consideration of their IRR (internal rate of return) and BCR (benefit-cost ratio)," he told the FE about merit of the thrift measure.

"Since different countries in the world are facing economic or financial shocks, Bangladesh's advance cautiousness in spending for the priority projects only is a good decision," Mr Chakraborty says.

The country's foreign-currency reserves now stand down US$40 billion in a slide from $46 billion a year back and some $48 billion at its summit before.