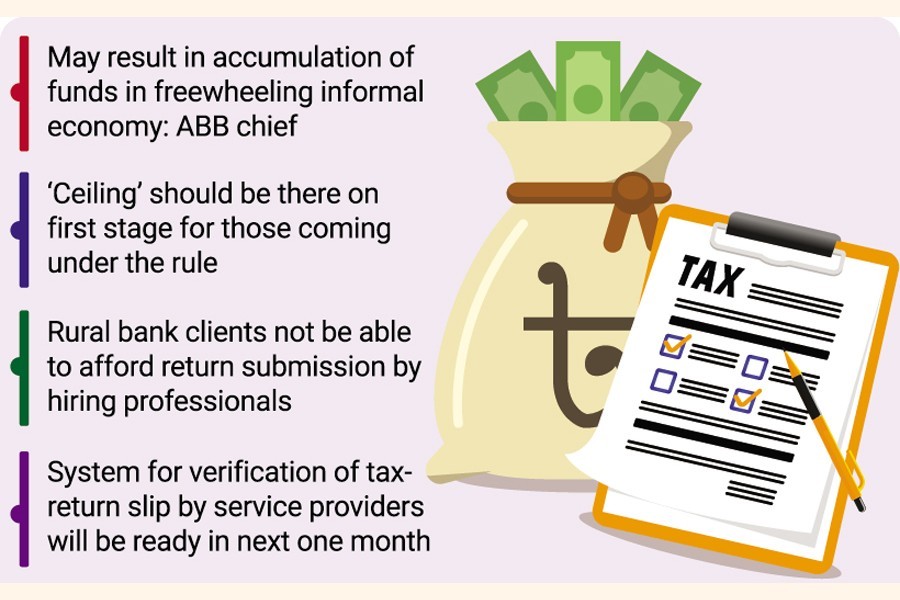 A flexible approach to enforcement of the provision for mandatory verification of tax-return slip is being adopted for now, officials say as apprehensions grow about money migration into informal economy.

The customized software on third-party verification that is a proof of tax return of service-seekers has yet to be readied by the revenue board although the rule came into force on July 1, 2022 through Finance Act 2022.

Proper verification is necessary as a provision of penalty amounting up to Tk 1.0 million might be imposed under the law if tax-return slip is detected as fake by tax officials.

As per the new finance act, people cannot operate their bank account, avail utility services and many other services without showing tax-return slip or proof of tax-return submission.

The tax slip of previous year is now a prerequisite for obtaining around 50 types of services, like opening and continuing bank accounts.

Bankers and tax experts, however, feel that mandatory tax-return-submission slip for obtaining services could be enforced in phases to help people get acclimatized with the new fiscal regime.

"The rule on mandatory submission of tax-return slip may encourage accumulation of funds in informal economy where documentation is not required," says Selim RF Hussain, Managing Director of BRAC Bank and Chairman of the Association of Bankers Bangladesh (ABB).

Over-accumulation of money is also detected by economists as a cause of the siphoning off funds to foreign tax havens-a syndrome now officially recognized and legal and fiscal processes are ongoing for wealth repatriation under new budgetary provision.

"We have sent letters from the Association of Bankers, Bangladesh to the finance minister to reconsider the fiscal measure," the leading banker adds.

A ceiling should be there on the first stage for the people who would come under mandatory rule, he suggests.

He forewarns that the measure may drive away small and medium enterprises (SMEs) from banks to cooperative societies or mohajans (moneylenders) where documentation as a prerequisite is but foreign to the operators.

The submission of tax return is complex in Bangladesh and most people have to take assistance of professionals for this, he notes about what comes to supra- taxing of the taxpayers.

Around 70 per cent of the clients of BRAC Bank are in rural areas and they would not be able to afford submission of tax returns by spending the money, he mentions as an example.

In the budget for the current fiscal year, the government has made submission of tax-return slip mandatory for all individuals and corporate taxpayers save few exceptions.

Adeeb H Khan, Taxation and Tariff Subcommittee Chairman of the Metropolitan Chamber of Commerce and Industry (MCCI), hails the move but says there are many 'low-hanging fruits' which should also be addressed.

"Many people are escaping by paying a fraction of their payable taxes. Collecting proper data to identify them is important alongside focusing on widening tax net," he says.

A senior tax official said the National Board of Revenue (NBR) already completed a demo of the customized software of the third-party verification with the supervision of the NBR chief.

It would be ready within a short time and accessible for the service-providers too, he added.

Service-providers have to access a website and insert TIN to see whether the service-seeker submitted tax returns.

"Considering privacy of the taxpayers, the website would have no other information except the acknowledgement of tax-return submission," he said about the upgrading of the outmoded taxation system in Bangladesh.

Another tax official, involved with policymaking, said the system would be ready in next one month and no stern action would be taken to ensure compliance in this period.

There will be no password on e-TIN site to allow access of service-providers for verifying proof of tax-return submission.

Responding to a question on continuing account transaction in the meantime without the system, the official said a phone number of the circle officer concerned has been provided in all of the banks so that they can verify by making a phone call.