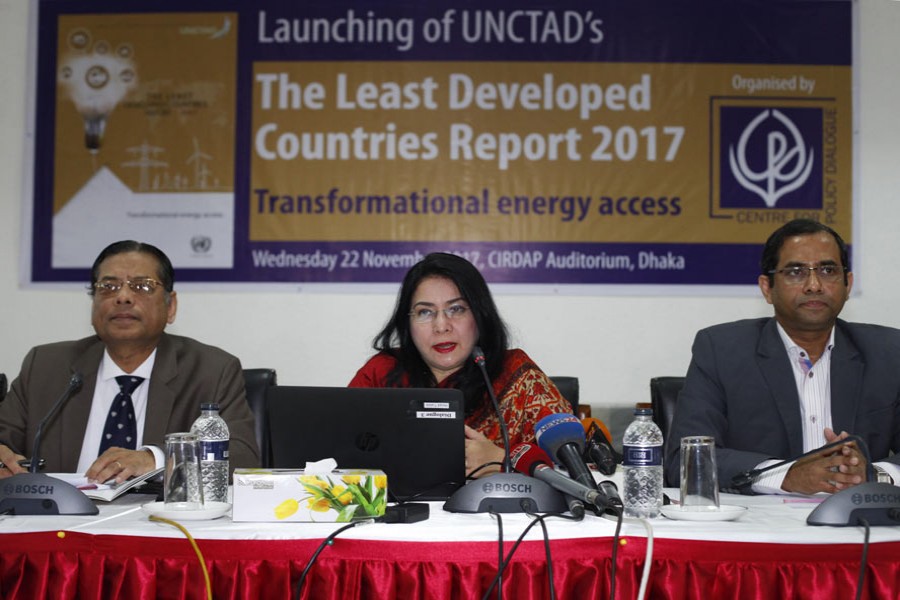 The Centre for Policy Dialogue (CPD) has said the Least Development Countries (LDCs) need to invest at least $12 billion to gain universal access to electricity by 2030.

"To achieve universal access to electricity in all LDCs by 2030, they require some $12 to $40 billion," said CPD Executive Director Dr Fahmida Khatun while presenting a keynote paper at a press briefing in the city's CIRDAP auditorium.

In the briefing CPD recommended the LDCs for harnessing international cooperation to ensure affordable, sustainable and modern energy for all by 2030.

It also urged for good governance framework in LDCs to ensure transformational energy access to all.

Dr Fahmida Khatun said, the LDCs will have to put more pressure on the developed countries for rendering assistance in power sector as they (developed countries) are the ones more responsible for the climate change.

She said the developed countries are bound to provide technology and financial assistance to the LDCs.

On Bangladesh, she said, the government has to work more to harness the international fund to meet the challenge of the country.

In her keynote paper she said though the urban area in Bangladesh dominates in terms of electrification rate, it is still low compared to world average adding "Only half of the rural population in Bangladesh has access to electricity."

CPD Distinguished Fellow Prof Mustafizur Rahman said the country needs to increase the production of energy if it eyes to achieve the target of being a developed country by 2041.

Bangladesh needs to bring socio-economic structural changes and for which the country has to come on industrial and service sectors reducing its dependency from agricultural sector for being a developed country by 2041 and for this the country has to increase the production of energy, he added.

"Around 67 per cent of energy in our country is consumed in household sectors while we have to reverse it and increase this amount for the industrial and service sectors," said Mustafizur Rahman.

He said Bangladesh also has to reduce its dependency from gas as fuel by exploring other sources of fuel to meet the demand.

CPD research director Dr Khondaker Golam Moazzem, among others, spoke in the briefing.