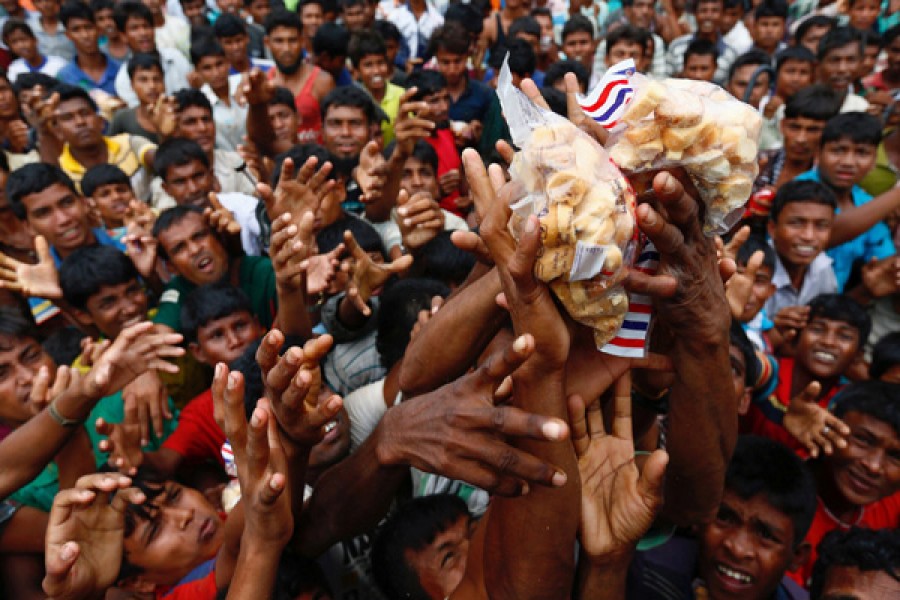 Bangladesh has been ranked 88th out of 119 countries on the Global Hunger Index this year.

The GHI, now in its 12th year, ranks countries based on four key indicators: undernourishment, child mortality, child wasting and child stunting, according to the GHI published in www.ifpri.org and reports by some agencies.

The 2017 report ranked 119 countries in the developing world, nearly half of which have “extremely alarming”, “alarming” or “serious” hunger levels.

The report states that Bangladesh hunger problem is under 'serious' condition with score 26.4.

However, Indian and Pakistan ranked even below Bangladesh and held 100th and 106th spots respectively.

Afghanistan has been ranked 107th position.

Though being under several international conflicts, North Korea (93) and Iraq (78) ranked much better Bangladesh in the hunger parameter.

India has been ranked third-worst in Asia, who only fared better than Afghanistan and Pakistan.

It further stated that India's poor performance is one of the main reasons pushing the South Asia region to the worst performing category on the GHI scale this year.

The GHI score is based on four indicators - proportion of undernourished in the population, prevalence of child mortality, child stunting, and child wasting.

IFPRI in its report said the 2017 Global Hunger Index (GHI) shows long-term progress in reducing hunger in the world.

The advances have been uneven, however, with millions of people still experiencing chronic hunger and many places suffering acute food crises and even famine.

According to 2017 GHI scores, the level of hunger in the world has decreased by 27 per cent from the 2000 level.

Of the 119 countries assessed in this year’s report, one falls in the extremely alarming range on the GHI Severity Scale; seven fall in the alarming range; 44 in the serious range; and 24 in the moderate range.

Only 43 countries have scores in the low range.

In addition, 9 of the 13 countries that lack sufficient data for calculating 2017 GHI score -including Somalia, South Sudan, and Syria- raise significant concern, and in fact may have some of the highest levels of hunger.

The 27 per cent improvement noted above reflects progress in each of these indicators according to the latest data from 2012–2016 for countries in the GHI.