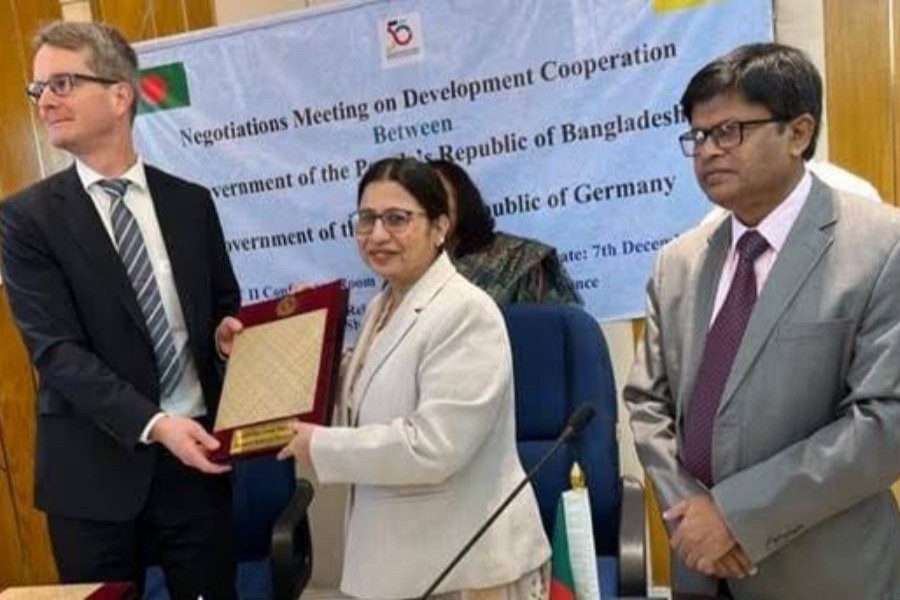 The governments of Bangladesh and Germany have signed two agreements under which the European country would provide 33 million Euros to Bangladesh as grants in renewable energy and climate change adaptation.

Out of the two agreements signed on Wednesday, one was Financial Cooperation (FC) 2021 agreement for the project titled 'Renewable Energy and Energy Efficiency III', a grant totalling up to 10 million euros (G to G) and the rest one is 33 million euros grants for the project titled 'Climate Change Adapted Urban Development (CCAUDP) phase-II (Khulna)'.

Achim Troester, Ambassador, Embassy of the Federal Republic of Germany in Bangladesh and Stefan Echner, Country Manager, KfW signed the agreements on behalf of their respective government.

This programme primarily aims to improve the living conditions of climate change and flood affected urban populations in Khulna, a coastal city of Bangladesh. This programme is expected to enhance the resilience of the target group against the adverse impacts of climate change by establishing comprehensive drainage network, canal revitalization, ensuring public amenities and flood resilient infrastructure along with other ground needs.

Within the scope of EUR 1.5 million out of the grant component to be used for accompanying measures, it is foreseen to provide support and capacity building in the technical assessment of projects and monitoring, training, project acquisition as well as the development of pipeline projects.