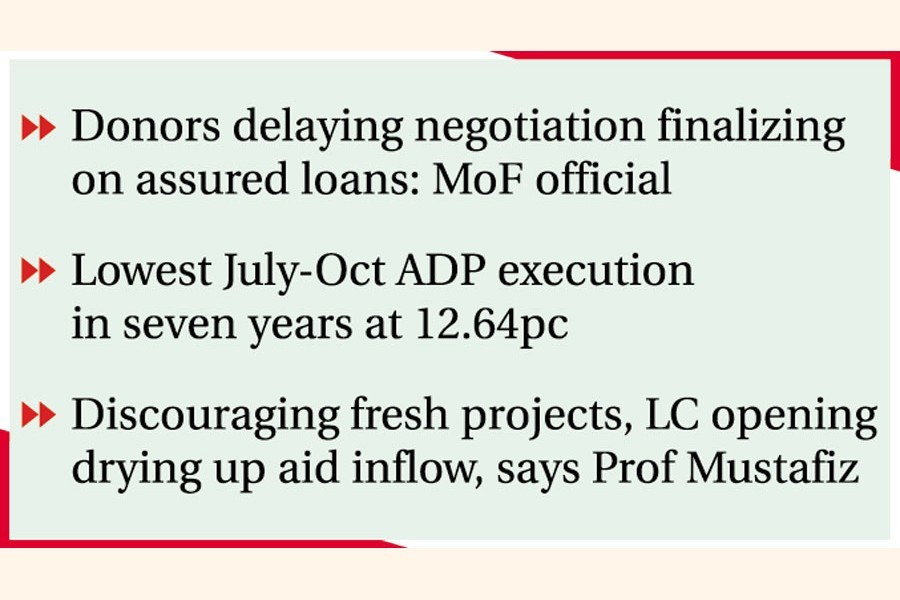 Foreign-aid flow into Bangladesh ebbs down amid slow development-project execution over the months following domestic belt-tightening and global doldrums, say analysts, when forex is much needed for the country.

After many moons, the foreign-assistance inflow is showing a falling trend in the current fiscal year (FY) 2022-23, an FE analysis has found.

The overseas bilateral and multilateral development partners not only released less assistance but also committed paltry amounts of aid during the first four months of the current fiscal compared to the same period last FY2022.

Bangladesh received 25-percent less medium-to long-term loans (MLT) and grants during the July-October period and, at the same time, 85-percent-lower aid commitment from the development partners, the analysis shows.

The development partners disbursed US$1.97 billion worth of MLT loans and grants in the four months under review compared to $2.63 billion in the same prior last fiscal, latest Economic Relations Division (ERD) data show.

At the same time, they made only $413.81 million worth of ODA commitment in July-October this year compared to $2.76 billion in the same period last FY2022, according to the official count.

Bangladesh's important development partners, including the Asian Development Bank (ADB), Japan, Asian Infrastructure Investment Bank (AIIB), China, India and Russia, had not made any aid commitment during this period of this fiscal year.

Analysts and government officials say the global economic scenario and government-adopted austerity in public spending in the development sector have hit the foreign-aid inflow hard as the government agencies are being discouraged from taking up fresh projects.

In addition, they add, the execution of ongoing many foreign-aided projects is also affected due to the austerity measures, adopted to ward of adverse impacts of global crunch.

Some of the proposed fresh projects with foreign-fund support are taking time to get approval from the Planning Commission (PC) as the Commission is "discouraging us" from taking up fresh projects, some government officials told the FE.

The Implementation Monitoring and Evaluation Division (IMED) has shown that the government ministries and agencies implemented only 12.64 per cent of the annual development programme (ADP) during the July-Oct period-the lowest in seven years.

In the same period last FY2022, the public bodies had executed 13.06 per cent of the ADP works.

The FE analysis has found that the month-on-month project execution has also slowed over the last few months.

In the last month of October, the government agencies implemented 4.09 per cent of ADP outlay. In the same month in FY2022, the execution rate was 4.8 per cent.

A senior PC official says they are cautiously scrutinizing the projects before approval as Bangladesh is facing "financial scarcity at this moment".

The project-implementing agencies should ramp up efforts to complete the ongoing projects rather than taking up new ones amid the austerity in the government, he views.

"We are discussing with different bilateral and multilateral development partners the necessity of extending assistance. The global scenario and local economic condition have affected foreign-assistance commitments," says a senior Ministry of Finance (MoF) official.

He mentions that many development partners are taking much time to complete negotiations for finalising assured loans.

"We are requesting some donors, including China, the Islamic Development Bank, the ADB and the World Bank, for finalising some assistance. But they are taking time to make the confirmation," the official says about one of the factors for fall in aid flow.

According to the ERD, the second-largest multilateral development partner -- the ADB -- confirmed only $5.0 million worth of assistance during the last four months.

The largest bilateral donor -- Japan -- is also on the same lane with its only $3.41 million worth of fund commitment for Bangladesh.

China-based development-partner AIIB has also shown big austerity in making fund commitment for Bangladesh during the last four months as it had not confirmed any single penny.

China, India, and Russia had also not made any commitment for the assistance in the July-Oct period this fiscal.

Out of the total $413.891 million foreign assistance, only the World Bank made a commitment for $300 million worth of aid during the reporting period.

"Since the government is discouraging fresh projects and the opening of LCs for import, the foreign-aid inflow has fallen," he added.

The above-mentioned impacts could cause overrun of the cost and time of the projects further in the future days, Prof Mustafiz predicts.

Bangladesh secures $4.7b in IMF loans