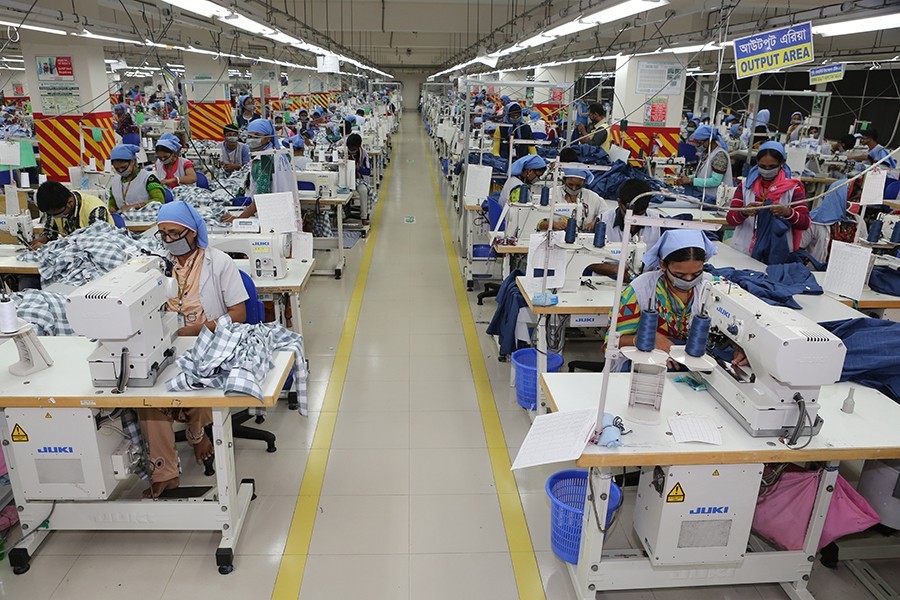 The country's readymade garment (RMG) sector went through ups and downs last year, prompting industry insiders to seek immediate policy support to tackle the challenges still ahead of them.

Although the garment export receipts showed an upward trend in the first five months of 2019, the trend reversed mostly in the second half of the year.

In January 2019, RMG exports grew by 8.68 per cent with earnings of US$ 3.13 billion, compared to the same month of 2018. But the export saw negative growth (3.49 per cent) in June 2019 first and the fall continued until November with an exception in July, official data showed.

The RMG export earnings during January-November period of 2019 clocked at $30.13 billion as against $32.92 billion in 2018, according to the Bangladesh Garment Manufacturers and Exporters Association (BGMEA) data.

Moreover, the year saw dependency on a few RMG items and traditional EU, US and Canada markets, little efforts for diversification and production of mostly cotton-based items.

About 83.34 per cent of the total RMG exports went to European Union and North America, the data showed.

Industry people said the big units are getting bigger and increasing the capacity but without proper planning with regard to markets and demand.

Such unplanned capacity expansion of the industry focusing on a few products is one of the major reasons behind weak price negotiation power and unhealthy competition among themselves, they said.

When asked, BGMEA president Dr Rubana Huq said, "It was a happening year for the RMG industry as 2019 marked a number of positive developments, yet it was not a pleasant time for our export as the growth had been faltering throughout the year and had a nosedive in the latter half."

Ending the stalemate with regard to Accord's phasing out from Bangladesh and forming a national safety monitoring regime, 'RMG Sustainability Council (RSC)', were major breakthroughs this year, she added.

The Accord, a platform of more than 200 global apparel brands, retailers and rights groups mostly based in Europe, was formed immediately after the Rana Plaza building collapse to improve the workplace safety in the country's apparel industry for a tenure of five years that ended in May 2018.

The Alliance, another such platform, folded its operations in the garment sector in Bangladesh on December 31, 2018, and more than a dozen of its signatory companies, out of 21, launched a new platform, namely 'Nirapon', to oversee the ongoing safety, training and helpline efforts at the Alliance-listed garment factories in March 2019.

Terming implementation of a new minimum wage a major challenge for the RMG sector, though complied, Ms Huq said, "The industry continues to face severe financial hardship, resulting in closure of 61 factories, and export kept plummeting for the fourth consecutive month since August 2019."

Some 60 garment factories have closed down during January-October of 2019, resulting in job losses for 29,594 workers, while entrepreneurs have made fresh investments to set up 58 new garment factories during the period, according to the BGMEA.

Of the new units, 43 per cent have been set up by new entrepreneurs and the remaining by the ones who are already in the business for a long period of time.

The new units are expected to create employments for more than 51,000 workers once they come into full operation within one and a half years.

"Stronger value of Bangladeshi taka against US dollar compared to competitor currencies has added to the woes as the industry keeps struggling with unit price," Ms Huq said.

Despite all the investments made in workplace safety, compliance, implementation of new wage structure and green industrialisation, the unit price did not see much improvement, she said, adding that the unit price in EU and the USA has increased by 2.22 per cent and 5.57 per cent respectively during January-October of 2019 (year on year), yet the price level remains significantly lower on a five-year comparison.

Citing the Office of Textiles and Apparel (OTEXA) and Eurostat data, she said the price of apparel imported by the USA from Bangladesh during Jan-Oct 2019 fell 2.20 per cent, compared to Jan-Oct 2014, and the same happened in the case of EU, with the price declining by 1.94 per cent.

Industry people, however, said that there are few other good signs in 2019, including supply of RMG products to big online retailer, Amazon, and coming back of another American company.

Online retail giant Amazon in November disclosed the names and addresses of its suppliers, including 23 factories from Bangladesh that produce Amazon-branded products, after the company recently faced criticism over its hosting third-party sellers who sourced apparel items from a Bangladeshi factory which was reported unsafe, the industry people said.

The 2019 calendar year started with labour unrest over the review of the last wage structure that set Tk 8,000 as minimum monthly wage for the RMG workers, which came into effect in December 2018.

At the June '19 International Labour Conference, worker delegates from Italy, Pakistan, South Africa, Brazil and Japan suggested forming a commission of inquiry against Bangladesh over the allegation that Bangladesh was not following ILO convention 87 on freedom of association and right to organise, convention 98 on right to bargain collectively and convention 81 on labour inspection.

Meanwhile, experts have recommended RMG product and market diversification, allowing foreign direct investment in the garment sector, devaluation of local currency against US dollar and restructuring of the government incentives to help the sector cope with the existing problems.

He also suggested devaluation of local currency against US dollar, saying that Bangladeshi exporters are losing their competitiveness, as their competitors have already devalued their currencies.

Incentives should be given to the targeted groups such as entrepreneurs who are producing value-added or upgraded items, managing waste efficiently and exporting items to markets other than traditional US, EU and Canadian markets, said Khondaker Golam Moazzem of CPD.

The government incentive packages for the sector should be restructured but without reducing the amount, he noted.