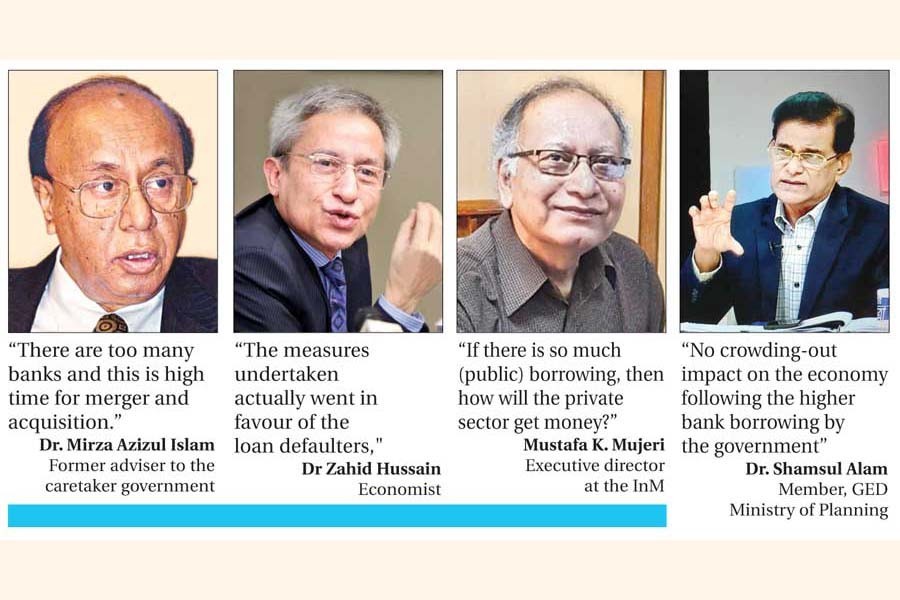 Almost all key economic indicators fell in 2019, though GDP (gross domestic product) growth was robust in the outgoing year, according to official data.

Economists said some new indicators that were better even in 2018 declined in 2019 worsening the macro-economic landscape.

But the economic indicators that have skidded in recent years are: slow growth in revenues, growing non-performing loan in the banking sector, slow credit growth to the private sector and fall in the key indexes of the capital market.

The revenue collection grew by 4.3 per cent during the four months of the current fiscal year, down from 6.7 per cent in the year-earlier period.

Private sector credit growth reached 1.55 per cent during the four months to October from 2.73 per cent a year earlier.

The capital market broad index stood at 4,400 in November, down by over 900 points in a year.

The non-performing loans jumped by 24 per cent to Tk 1.16 trillion in September last from Tk 939 billion in December in 2018.

The new issues that cropped up in the year under review are: government's higher bank borrowing, soaring inflation and poor export receipts.

Still, Professor Dr. Shamsul Alam, member at the General Economics Division of the ministry of planning, sounded optimistic about the indicators, eulogising what he called "impressive growth."

Dr. Alam said there was buoyancy in exports receipts in 2019 and remittance flow also maintained higher growth in 2019.

"To my mind, all these indicators have been playing an important role in economic transformation of Bangladesh," said Dr. Alam, a senior secretary.

He, however, admitted inflation has been flaring up over the past four months, which has eroded real income.

Yet, he believed the four months cannot be representative for the entire year.

About growing non-performing loans in the banking sector, Dr. Alam said the government may form a high-powered commission to address the much-talked issue with the professionals.

Dr. Alam also underlined the need for reforms in the ailing capital market.

"This is a complex market and it needs policy that should be adopted very carefully."

On higher borrowing from the banking system, Dr. Alam said Bangladesh remained still in the "comfortable zone" when it comes to such loans.

"I don't see any crowding-out impact on the economy following the higher bank borrowing by the government to fund the budget as the liquidity is adequate in the banking system," he stressed.

There was a significant rise in government's borrowing from banks in recent times. It has already borrowed around 90 per cent or Tk 426.07 billion out of its annual target set in the budget.

Also, a Tk 264.46 billion was borrowed from the banking sector in the entire 2018-2019 fiscal, according to Bangladesh Bank data.

Economist Dr Zahid Hussain told the FE the new challenges the county faced in 2019 are negative growth in exports and higher bank borrowing.

"These two challenges are very much critical considering its adverse impact on the macro-economy."

Dr. Hussain said two old challenges like the growing volume of non-performing loans and the poor performance of the stock market are among the long list.

He was critical of the government measures undertaken to improve the banking sector.

Against the backdrop of rising soured loans, BB's special policy for the loan defaulters was a talked-about issue as it took effect.

"In my view, the measures undertaken actually went in favour of the defaulters," he said.

He, however, suggested that two reforms must be carried out in the banking sector: Improving corporate and regulatory governance.

Dr. Hussain, who was until recently lead economist at the Dhaka office of the World Bank, argued that the revenue mobilisation remained poor due to slowdown in business activities.

He also said the there is also a policy barrier to benefitting from the newly-introduced VAT (valued Added Tax) Act.

The new VAT law was passed in parliament in 2012 and has been in force since July this with some "distortions."

"Some new things were added, but were not in the original law, like the truncated VAT and rebates on many items," Dr. Hussain said.

On merchandise shipment, Dr. Hussain said trade war between the United States and China has hardly impacted Bangladesh like its competing nation Vietnam.

The country's export receipts fell by over 7.0 per cent during the first five months to November. The growth was over 17 per cent growth during the same period a year earlier.

Mustafa K. Mujeri, executive director at the Institute for Inclusive Finance and Development (InM), said the economic signs showed in 2019 are tantamount to 'stagnation.'

Stagnation is a situation in the economy where the output falls amid rising inflation. The inflations has been rising, but the official GDP exceeded 8.0 per cent growth last fiscal.

Dr. Mujeri, who had served as the chief economist at the central bank, said the banking sector has suffered it's the worst in 2019.

He was critical of the government move to contain the troubled loans, saying these are nothing but "eye-wash."

"If there is so much (public) borrowing, then how will the private sector get money?" he asked.

Dr. Mujeri also said that country's productive sector seems to be facing a slump as raw materials imports have dwindled in the year.

The country's import growth has been showing a declining trend in recent times, which also gives an indication of slow investment growth in the country.

Dr. Mirza Azizul Islam, an economist and former adviser to the caretaker government, said the loan defaulters are being "rewarded" instead of getting punished.

He said the loan defaulters now need to repay 2.0 per cent down payment with single digit interest rate over a period of 10 years.

"The genuine businessmen are not getting such benefits."

Referring to the single-digit lending and deposit, Dr. Islam said if deposit rate becomes 4.0 per cent and inflation becomes 5.0 per cent then the people lose their capital.

There is little possibility that a single-digit interest rate will be enforced from January, he said.

He said the lending rate remains high because the banking system is not efficient.

"There are too many banks and this is high time for merger and acquisition."

Dr. Islam said that there is an unholy nexus between businesses and the banking sector.

"Businessmen usually are sponsors of banks, they are well connected with politics and exploit the banking system," Dr Islam said.

He said improving the banking sector is a must to have a vibrant financial market.

"The government must give its highest priority to the sector."

Referring to the poor performance of the capital market, Dr Islam, a former chairman of the Securities and Exchange Commission, told the FE the market performed poorly due to the banking sector.

"Firstly, banks are listed and if their incomes fall their value drops accordingly," he said.

"Secondly, many traders were highly dependent on the banking system for trading, if the banks do not provide liquidity, the market also fall," he added.