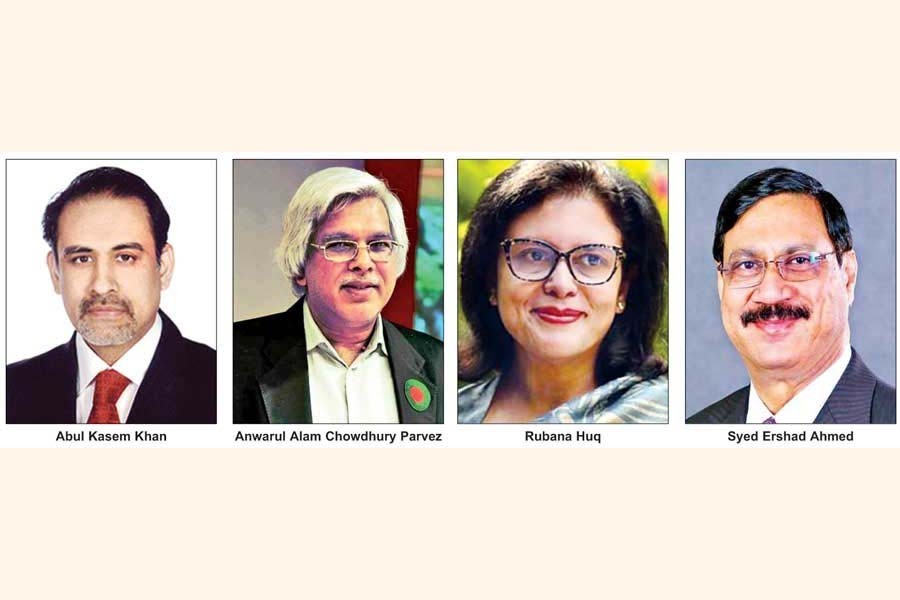 They also cited a raft of challenges that lie ahead in 2020.

The business leaders, however, expressed their optimism about the prospect of an improved business environment, as the banks are set to introduce a single-digit rate of interest on industrial lending from the first day of next year.

Summing up the outgoing year, former president of Dhaka Chamber of Commerce and Industry (DCCI) Abul Kasem Khan said, "There have been both challenges and opportunities for the country's business community this year."

The biggest discomfort was a decline in export earnings in recent months while the weak private sector credit growth has also become a concern as it hit a record nine-year low, he told the FE.

He also observed that dealing with the growing amount of non-performing loans (NPLs) was another major challenge for the country's financial sector.

Meanwhile, against the backdrop of revenue shortfall, the government's borrowing from the private sector has increased significantly this year, surpassing the previous fiscal year's (FY), 2018-19, total amount in the first six months of FY '20.

The heavy government bank borrowing might have played a role in declining the private sector credit growth, Mr Khan opined.

The former DCCI president also said if the central bank's decision on single-digit lending rate for industrial manufacturers is implemented, it would encourage businesses to make fresh investments.

Expressing concern over the revenue shortfall, he said experts have been talking about raising the tax-GDP ratio to 16 to 17 per cent, but the ratio still remains at around 10 per cent.

The taxation policy should be reviewed to make it a bit liberal in order to raise revenue collection, he suggested.

Calling for a cut in tax rate for businesses, Mr Khan said, "It is a general concept that revenue would fall if tax rate is lowered, but in many countries, it was observed that the volume of trade grew because of tax cuts, which eventually led to growing revenue."

He also said the National Board of Revenue (NBR) should be modernised in a bid to simplify taxation process, ease audit procedure and prevent harassment of taxpayers.

Like this year, the country's business community will expect to see a healthy stock market in 2020, he said, adding that the government took various measures to revive the market but to no avail; rather some of the measures had backfired.

Mr Khan underscored the need to develop a functioning bond market in the coming days so that companies can raise funds for their businesses from the bond market.

He also said a stable capital market is necessary to boost confidence of private sector entrepreneurs as well as foreign investors.

Focusing on this year's achievements, Mr Khan said Bangladesh has moved eight notches up in the global Ease of Doing Business Index though there was scope to do much better.

Out of 190 countries, Bangladesh advanced eight steps in the ranking to 168, according to a report of the World Bank.

The country's macroeconomic strategies are fantastic, but the problem lies in execution level, the businessman said, adding that public-private partnership from policymaking level to implementation level is required to have full benefits of the policies.

Rubana Huq, president of Bangladesh Garment Manufacturers and Exporters Association (BGMEA), said it was a happening year for the readymade garment (RMG) industry as 2019 marked a number of positive developments.

"But the year was not a pleasant one for export as growth had been faltering throughout the year and had a nosedive in the latter half," she told the FE.

Terming implementation of the new minimum wage a major challenge for the RMG sector, she said, "Though complied, the industry continues to face severe financial hardship, resulting in closure of 61 factories, and export kept plummeting for the fourth consecutive month since August 2019."

Stronger value of Bangladeshi taka against US dollar compared to competitor currencies has added to the woes, as the industry keeps struggling with unit price, Ms Huq said.

She also said despite all the investments made in workplace safety, compliance, implementation of new wage structure and green industrialisation, the unit price did not see much improvement.

The BGMEA president said the unit price in EU and the USA has increased by 2.22 per cent and 5.57 per cent respectively during Jan-Oct 2019 (year-on-year), yet the price level remains significantly lower on a five-year comparison.

Citing the Office of Textiles and Apparel (OTEXA) and Eurostat data, she said the price of apparel imported by the USA from Bangladesh during Jan-Oct 2019 fell 2.20 per cent, compared to Jan-Oct 2014, and the same happened in the case of EU, with the price declining by 1.94 per cent.

About achievements of the sector, she said, "Our journey to sustainability continued with pride as the number of green factories crossed 100, including 25 platinum LEED-certified factories, while 500 more are on the pipeline."

Ms Huq also said ending the stalemate with regard to Accord's phasing out from Bangladesh and forming a national safety monitoring regime, 'RMG Sustainability Council (RSC)', were major breakthroughs this year.

Terming 2019 a challenging year for the country's businesses, Bangladesh Chamber of Industries (BCI) President Anwarul Alam Chowdhury Parvez said negative growth in export earnings, lack of good governance in financial sector and the failure to revive stock market were the key concerns for the business community.

Besides, adverse impacts of Brexit and trade war between USA and China on the global economy have also hit the country's economy to some extent, he said.

Terming recent downtrend in export earnings a major concern for businesses, he said, "There is no alternative to devaluating local currency to increase export earnings."

He observed that the country's inward remittance may register a staggering 18 per cent growth by the end of this year as announcement of 2.0 per cent cash incentive on remittances encouraged expatriates to send their hard-earned money through formal banking channels.

Devaluation of taka may do the same in the case of export earnings, he added.

The BCI president also said a functioning and strong stock market is very crucial to attract foreign investment in the country and help private sector raise their required capital for business.

There has been no good news in employment generation scenario in 2019, Mr Parvez said, adding: "The government should focus more on diploma and technical education to create skilled workforce to meet the demand of industries."

He said the government has created a Tk 1.0 billion start-up fund for youth entrepreneurs but gave no guideline on how or to whom the fund would be disbursed.

Apart from transparent disbursement of such funds, establishing industry-centric training institutes can pave the way for creating more jobs, he suggested.

President of American Chamber of Commerce (AmCham) in Bangladesh Syed Ershad Ahmed said unrest in global market due to Brexit and trade war between USA and China has roles in Bangladesh's negative export growth.

Besides, he said, the country's RMG sector couldn't overcome the challenge of finding new market for their products in 2019 while other export-oriented sectors couldn't diversify their products for the competitive global market.

He also said potential sectors like pharmaceuticals, ceramic and light engineering can bring fortune for the country, but strong inter-ministerial and inter-departmental coordination is required to find overseas market for such products.