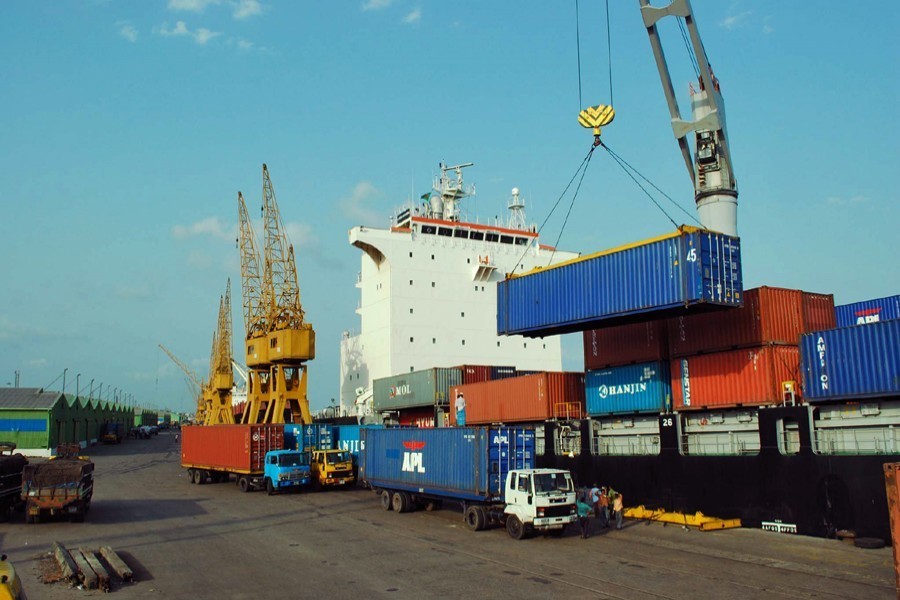 Export earnings and remittance inflow both recorded substantial fall in September in tandem with a slide for months, which could stoke stress on Bangladesh's foreign-exchange reserves, sources say.

Official data show export earnings marked a 6.25-percent negative growth year on year while remittance inflow fell 24.4 per cent in the past month-owing to global crunch as well as local hurdles.

The country's monthly merchandise-export earnings slipped into the negative territory in September in an upset to 13 months of robust growth, principally amid sluggish apparel sales abroad, sources say.

Export earnings in the past month stood at US$ 3.90 billion, recording a 6.25-percent negative growth year on year, according to Export Promotion Bureau data published on Sunday.

The country had received $4.16 billion from exports in September 2021.

Pulled by decline in apparel shipments, the September'22 earnings also fell short of the monthly target by 7.14 per cent.

Readymade garment (RMG) earnings, after maintaining a robust growth trajectory during 13 months since August'21, declined last month by about 8.0 per cent to $3.16 billion year on year.

Between September 2021 and August 2022, RMG exports had maintained year-on-year hefty growth of over 30 per cent, excepting in May and July when the growth slowed to 23.53 per cent and 16.61 per cent respectively.

The overall export-earning growth during July-September quarter of the current fiscal year slowed 13.38 per cent over that of the corresponding period of last fiscal.

Since September'21, bar May and July this year, the country's single-month export earnings had surpassed four-billion mark.

Of the total $12.49 billion worth of export income during the July-September period, the RMG sector fetched $10.27 billion, posting a 13.41-per cent growth over last fiscal year's.

A breakdown of the clothing-sector performance shows that the knitwear subsector of RMG earned $5.16 billion from exports, registering 9.40-per cent growth.

Earnings from woven garments amounted to $3.89 billion in the past two months, up by 18.73 per cent.

Home-textile exports also recorded over 26.59-percent growth to $353.48 million in the first three months of this fiscal.

Exporters cited mainly demand-side crunch for the fall in RMG earnings due to high inflation in major destinations, although timely shipments faced difficulties due to gas and electricity problems in the country.

Asked about the trade performance, BGMEA vice-president Md Shahidullah Azim said it was assumed that September earnings would witness negative growth as exporters had got lower work orders for months.

"We kept an eye on NBR data on a daily basis which showed about 12-percent decrease in RMG earnings last month compared to September'21," he notes.

Bangladesh, which fetched orders aplenty during post-lockdown periods from its European and US markets to cater to consumer needs, now receives 20-30-percent less orders, he said.

"Global buyers are reducing work orders for Bangladesh from the projected ones as they also have their stocks unsold because of rising inflation in European and US hubs," he explains the chain effects of global volatility.

RMG exporters apprehend that export earnings might sustain negative growth through the months ahead.

Meanwhile, jute sector, which demonstrated a negative growth in the last fiscal, showed a turnaround with a 15.71-percent growth in the July-September of FY'22 with $245.65 million in earnings.

Earnings from agricultural items, including vegetables, fruits and dry foods, witnessed a 20.19-percent fall. The sector's aggregate earning stood at $274.95 million during the period, which was $344.52 million.

Leather and leather products recorded over 20.87-percent growth to earn $327.97 million during this July-September period against $271.34 million in the corresponding period.

The country earned $206.51 million from export of engineering products in the last three months, which was $144.39 million in the corresponding months of last fiscal.

Earnings from frozen and live fishes decreased 12.98 per cent to $132.08 million during the same period.

According to the EPB, export of plastic products witnessed over 56-percent growth to $48.14 million.

The government has set a target of earning $58.0 billion from export of goods in the current FY, in a modest rise from $52.08 billion earned last fiscal.

Meanwhile, remittance also remains on a slide as Bangladesh received the lowest inflows of foreign currencies from expatriates in seven months, with the September amount dropping 24.4 per cent, official data show.

Bangladeshi nationals working abroad sent nearly US$1.54 billion in September, down by 24.4 per cent from US$ 2.03 billion earned in the previous month, according to the latest data of Bangladesh Bank.

Amid growing pressure on the country's foreign-exchange reserves in the wake of dollar appreciation and mounting import costs following the Russia-Ukraine war, Bangladesh saw a ray of hope in July last when the inward flow of remittance recorded over 12-percent growth to US$ 2.9 billion from US 1.83 billion.

Market-insiders, however, say the flow of remittance decreased as money transfers through informal channels such as 'hundi' might have resumed because of higher import payments alongside the easing of pandemic restrictions.

Hundi normally links with under-invoicing of imports, according to the insiders.

Besides, gap between formal banking-channel exchange rate of the US dollar against the Bangladesh Taka (BDT) and kerb market encouraged illegal 'hundi' activities, they add.

Asked about allegation of 'hundi' operations, a senior official of the Bangladesh Bank told the FE: "We're watching the overall inward-remittance activities closely to neutralise such unofficial operations."

"We're not sure about the reasons right at the moment. We need to wait for at least 15 days to understand the situation," the senior banker said about the apparent puzzle.

Meanwhile, the government has raised the cash incentives on remittance to 2.5 per cent from 2.0 per cent, aiming to encourage the remitters for sending their money through official channels instead of the financial underworld.

Effective from January 01, the new rate is a New Year's gift to the remitters from the Prime Minister, according to a statement issued by the finance ministry earlier.

Currently, 29 exchange houses are operating across the globe along with nearly 1500 drawing arrangements set up abroad to boost the remittance inflow, according to BB sources.

The central bank had earlier taken a series of measures to encourage expatriate Bangladeshis to send their money home through the formal banking channel instead of 'hundi' conduit in order to prop up the country's falling foreign-exchange reserves, which has dropped below $40-billion mark.

As a further austerity measure the government has restricted imports, put on hold less-priority projects and discouraged unnecessary foreign tours by officials to shield the forex reserves against fall.