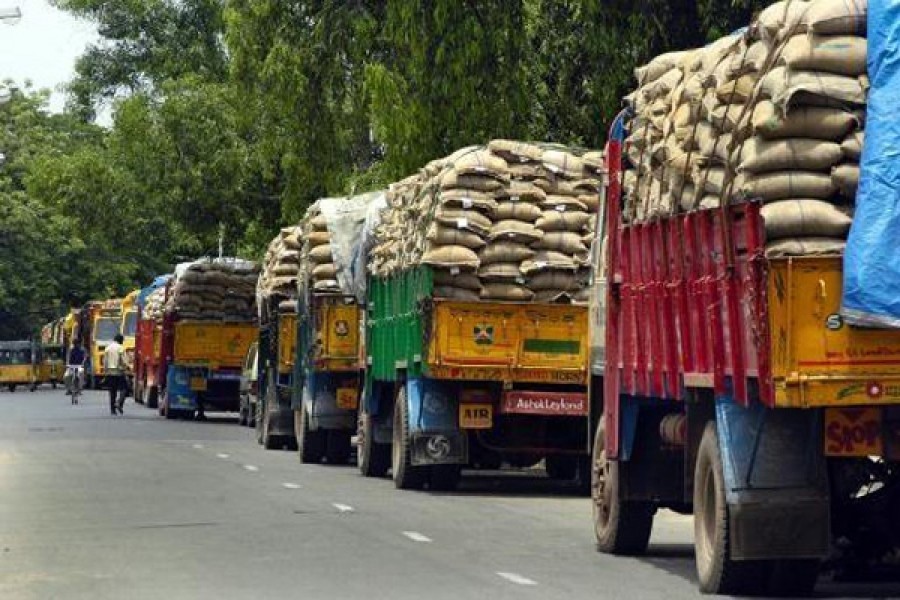 File photo shows trucks standing laden with rice, the prices of which have recently soared causing the government to import it from a few countries, including Myanmar and Cambodia.

The country's conomy faces some downside risks in the near term predominantly for an upturn in inflation, says a quarterly review by the central bank.

The latest Bangladesh Bank Quarterly (BBQ) outlook on the country's economic situation for April-June 2017 carries the caution because of higher risk stemming from inflation.

However, a Bangladesh Bank senior official also mentioned export and remittance downturn and a slower-than-expected pace of overall economic growth that contributed to the headwind.

"…there are some downside risks to the near-term economic outlook. Inflation risks are higher, stemming from food prices," the central bank said in its April-June 2017 BBQ.

On possible remedies, the Bangladesh Bank said well-coordinated monetary and fiscal measures could help mitigate inflationary risk in the near future.

The latest observations from the governing bank came against the backdrop of rising trend in inflation in July, the first month of the current fiscal year (FY), 2017-18.

The inflation, as measured by consumer price index (CPI), went up by 0.17 percentage points to 5.57 per cent on point-to-point basis this past July by official count as against 5.40 per cent in the same month last year. It was 5.94 per cent in June this calendar year.

"Looking ahead, higher food prices and high inflation expectation and credit growth would likely create inflationary pressures in the FY 18," the BBQ forewarned.

However, moderate fuel prices and subdued global commodity prices could provide some cushion, it added.

During FY 17, inflation pressure came from food inflation with a higher contribution in the second half of the fiscal, according to the quarterly review of the country's macroeconomic health.

Besides, lower inflow of inward remittances might have some adverse effects on the domestic demand while falling trend in export earning is likely to put pressure on the exchange rate, according to the BB official.

"Both factors may fuel the inflationary pressures on the economy indirectly if the existing trend in inward remittance-and export earning continues up to December 2017," the BB official told the FE Monday.

He also said the government as well as the central bank is still working to revamp the inflow of remittances shortly.

The BBQ also says the banking-sector indicators depict a mixed picture in the final quarter of the FY 17.

At the end of June 2017, the rise in the capital-to-risk weighted-asset ratio (CRAR) and the decline in the non-performing loans (NPLs) indicate some improvements, while the deterioration in provision-shortfall position of banks against classified loans represents weak performance.

It, however, says the provision-shortfall position for public banks was Tk 73.6 billion end of June 2017 while all other banks maintained provision surplus during the quarter under review.

The spread between monthly weighted average lending rates and deposit rates in the banking sector remained below 5.0 per cent, while the inter-bank money-market rate edged up modestly.

At the end of June, credit growth exceeded deposit growth by five percentage points, according to the BBQ.

The central bank of Bangladesh had earlier set the safe limit of ADR at 85 per cent for conventional banks and at 90 per cent for shariah-based Islamic banks.

On the other hand, the growth in advances slightly increased to 16.0 per cent in June compared to 15.9 per cent in March.

"The liquidity position in the banking sector as a whole remained comfortable at the end of June 2017, helped maintain stability in the money-market conditions," the BBQ noted.

The country's economy kept its momentum in FY 17 with GDP (gross domestic product) expanding at 7.24 per cent, well above the 7.11 per cent growth recorded a year before.

The growth pickup was broad-based in FY 17. The growth in aggregate output was largely led by the industry sector.

The service sector and agricultural activities grew by 6.5 per cent and 3.4 per cent respectively, higher than those in the previous fiscal year.

"Agricultural output growth was driven mainly by strong (6.3 per cent) growth in fishing-sub sector while growth in crop production moderated amid recent flood-related production losses," the central bank explained in the BBQ.