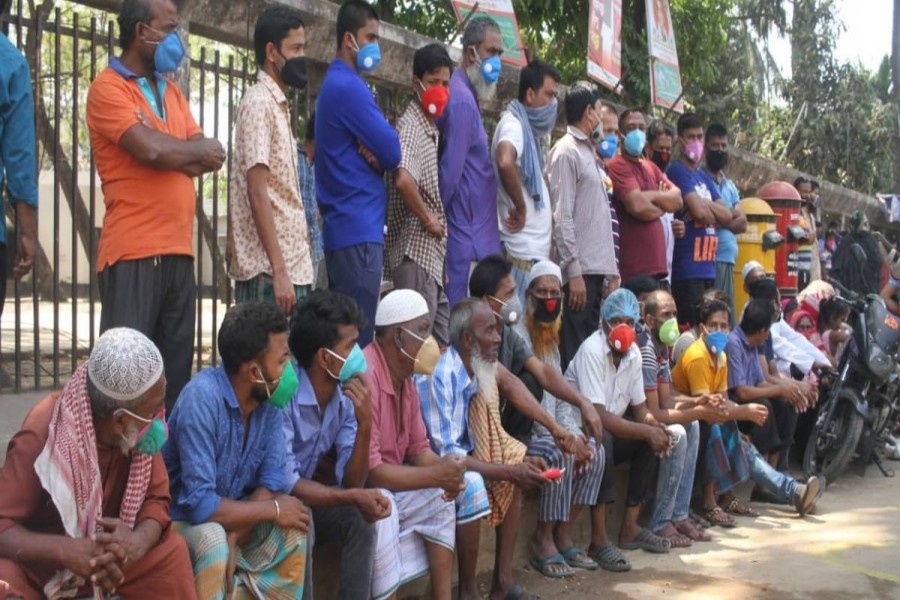 Piling on top of the pre-pandemic stock of jobless population, economists apprehend the newly unemployed resulting from firms severely scaling back on their activities as part of ‘lockdown’ measures may lead to serious social headwinds on the country’s economy during the post-Covid era.

They also predicted the new poverty and unemployment trends will have a dominant urban nature, UNB reported.

Besides, the economy is likely to continue facing challenges on several fronts - particularly reviving exports, reversing a likely drop-off in inward remittances that has not yet eventuated, and the perennial issue of boosting investment, particularly from the private sector.

Noted economist Dr Debapriya Bhattacharya, a distinguished fellow at the Centre for Policy Dialogue (CPD), said the post-Covid situation depends largely on how much more protracted the already protracted pandemic is allowed to become, and whether the intensity of casualties will increase or not.

“Nonetheless, the number of things is becoming quite obvious. The first and foremost issue is that 1-2 crore (10-20 million) people will slip below the poverty line. So, the number of poor is going to increase. It’ll have added demand for safety net programmes. This is the time to gradually introduce a universal social protection system including the people of the lower middle class,” he said.

On the other hand, there’ll be another two crore people who will be under threat for losing jobs.  Many of them are from the informal sector, he said.

“Along with outstanding stock of unemployed population, this newly unemployed will create a serious social pressure on the economy,” said the public policy analyst adding that the government will definitely have to think about designing support measures for these people going beyond the traditional bank-based incentive or credit-based incentive.

With a highly possible slowdown of the export sector and remittance earnings, the focus has to be more on domestic market-oriented enterprises and agriculture linked activities. There are some government support policies in this area, but their effective implementation will play the critical role for the rebound of the economy, he said.

“Lot of these support measures will depend on the government’s ability to spend, but we know the government fiscal space is very constrained,” said the economist adding that the year-closing data of (2019 fiscal) on revenue collection indicates the budget deficit will go beyond the budgeted 6 per cent of GDP unless the government cuts down on expenditures.

“By the end of the year, there’ll be a need to revise the budget framework of the 2020-21 fiscal year by strengthening the income size (particularly by borrowing more from abroad) and harmonizing public expenditures with a view to resources available for more post-Covid support policies,” he said.

Explaining the reasons behind this uncertainty, he said the resurgence of Covid-19 infection is again seen in the country’s large RMG export markets in Europe and America and there is also uncertainty for the returnee migrants to get back their jobs abroad. The image of Bangladesh regarding Covid test is not good in the world, he said.

Noting that the economy usually sees quick recovery from recession in any country, he said it can be expected that the demand side will improve because of stimulus packages. But it’s tough to say when this pandemic will go. “So, the rebound of the economy will take a huge time,” he added.

“Many families who were above the poverty line have lost 60-70 per cent incomes amid the Covid situation and they have gone again under the poverty margin. On the other hand, there is serious problem in the implementation of the social safety net programmes as irregularities are being reported in different places,” said the Dr Islam.

About employment, the former finance adviser said it can’t expect much from the agriculture sector as the government now puts emphasis on agricultural mechanization which will result in shrinking employment in the sector.

Dr Selim Raihan, Executive Director of South Asian Network on Economic Modeling (SANEM), said it’s difficult to predict the post-Covid period as the pandemic may not go away completely. But now there should be some priorities to revive the economy offsetting the impacts of the Covid-19 pandemic, he said.

The priorities, according to D Raihan, should be: restoration of economic activities as much as possible when the Covid situation will start climbing down from its peak, addressing institutional irregularities in the economic recovery process, and implementation of social safety net programmes properly preventing irregularities, he said.

“The Covid badly affected the country’s export and employment sectors and poverty alleviation. Besides, the remittance earnings may decline in the days to come,” he said adding that the export earnings declined by US$ 6 billion in the last fiscal year due to the pandemic.

He suggested diversification of export and exploring new markets for bouncing back from the export situation. “Bangladesh can explore Chinese market as it has recently given 97 per cent duty-free access to a listed number of Bangladeshi products in the Chinese market,” he said adding that Bangladesh can also explore further in Indian market.

Noting that an unprecedented crisis has been seen in the labour market, the economist suggested the formation of a Labour employment commission comprising experts and representatives of the various stakeholders to assess the situation and address the unemployment.

Decision on HSC exams: Education board chairmen to meet Sept 24