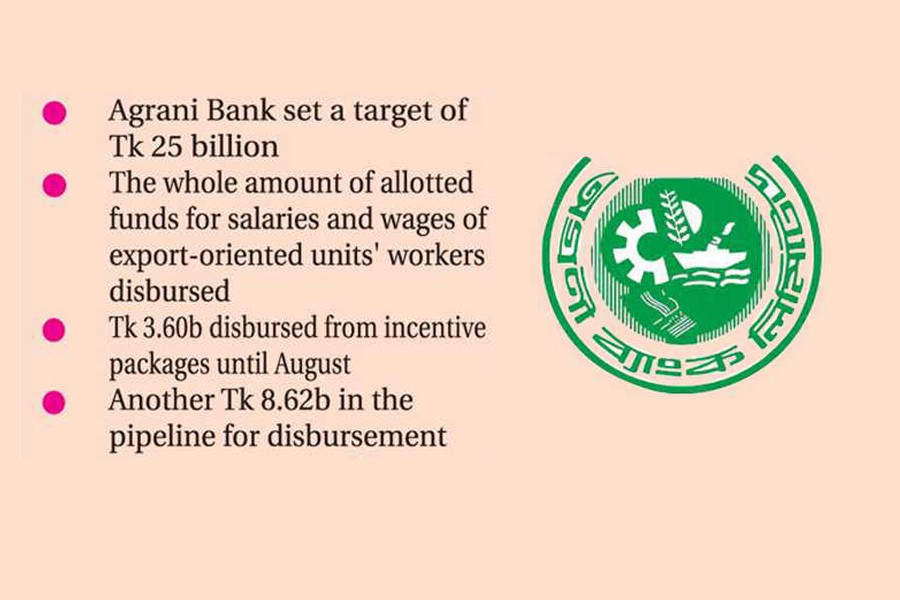 The state-owned Agrani Bank Ltd has supported 17,308 enterprises and individuals so far under the incentive packages declared by the government to revive the economy amid the Covid-19 pandemic.

By the end of August last the bank disbursed Tk 3.6 billion (360 crore) and another Tk 8.62 billion (862 crore) loans already sanctioned are in the pipeline for disbursement, according to the latest available report of the bank.

The bank says if the sanctioned loans can be disbursed to meet the government's incentive package targets, the economy will gain the much-needed momentum. So Agrani Bank is following all the government directives to the best of its ability to achieve this goal.

According to the published report of the bank, loans from specialised incentive packages are meant for working capital for the industries, the salaries/wages for export-oriented units' workers, cottage, small and medium enterprise (CSME) and agricultural sectors. Credit facilities have been extended for grain and crop cultivation, affected low income professionals, farmers and marginal businessmen. Incentives have been disbursed for back-to-back letters of credit (LCs) on import of raw materials. For all these sectors, Bangladesh Bank has set the Agrani Bank a target of Tk 25 billion.

According to the report, Agrani Bank disbursed Tk 613.1 million from the allotted Tk 4.4 billion among 14,761 farmers in the crop/grain cultivation sector. From the allotted Tk 1.24 billion under the specialised incentive package for the agricultural sector, Tk 178.8 million was disbursed among 2106 farmers. From the Tk 1.35 billion allotted for the wages/salaries of export-oriented units' workers, the whole amount was disbursed to 106 industries. Tk 509.8 million was disbursed to four industries as working capital while another Tk 1.86 billion is in the pipeline for disbursement to 25 industries.

On the other hand, Tk 669.2 million was disbursed for 283 back-to-back LCs under the incentive package for back to back LCs.

Agrani Bank Managing Director and Chief Executive Officer (CEO) Mohammad Shams-ul Islam said, "The nation's economy has slipped into a crisis due to COVID-19. This state of crisis is synonymous with the frail world economy. Under these circumstances our Prime Minister has not only taken steps to lift the country from this crisis, but also has given the people incentive packages to revive the economy in advance. If we can realize the packages declared for industry, agriculture and CMS, then we are certain that the economy of the country will turn around in the shortest possible time."

He also said, "We are working tirelessly to implement 100% of the targets fixed by the Bangladesh Bank in this regard. As a sign of their acknowledgement we have already received a note of satisfaction from Bangladesh Bank."

He said further, "We have already disbursed 100% of the allotted funds for the wages of export-oriented units' workers. Our employees are playing an active role in the disbursement for all incentivised sectors, laying the emphasis on agriculture. I hope that not only our bank but all banks of the country will try to implement the initiative packages declared by our Prime Minister to rejuvenate the nation's economy."