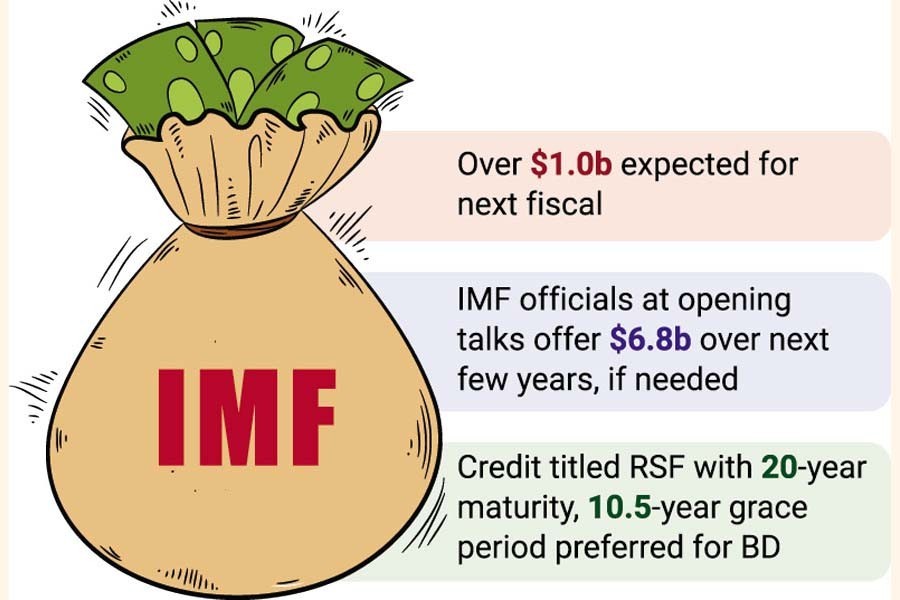 After the lapse of a decade, Bangladesh is likely to borrow funds from the International Monetary Fund (IMF) to narrow its budget deficit, seen as a bit high in current context.

Ministry of Finance (MoF) officials said Monday they had opened negotiations with the Washington-based lender on the potential budgetary support.

"We had a meeting with IMF Dhaka office on Monday. The IMF has offered us the budgetary credit support to help minimise the budget deficit," a senior MoF official said.

The IMF recently offered the policy-support credit meant for financing the deficit of the total Tk 6.78-trillion budget in the upcoming fiscal year (FY) 2022-23.

Back then, Bangladesh was hit hard by a global financial meltdown that started in 2007.

A senior MoF official says since Bangladesh has also been affected by the Covid-19 pandemic and the recent global price push amid Russia-Ukraine war, "we are trying to explore the budget-support facility from the IMF".

"The amount of the loan has yet to be confirmed. But we are hopeful of getting more than $1.0 billion from the IMF," he told the FE.

"We started meeting with the Washington-based lender Monday. Some few other meetings will be held in the coming days before finalising the loan," says another MoF official.

The lender informed Bangladesh that the country could avail up to $6.8 billion worth of loans in next few years, if the need arises so, the official adds.

The government will analyse detailed offers of the IMF with the country's financial health, he further says.

"We will also calculate the repayment cycles and its pressure on government's fiscal and monetary situation amid the internal and global situations," he adds.

Besides, the government will analyse IMF's proposed terms and conditions regarding different kinds of reforms tagged to the credit facility.

The Fund has offered the RSF as it wants to help Bangladesh in the area of climate-change impact.

The RSF arrangements have a 20-year maturity and a 10.5-year grace period during which no principal is required to be repaid.

Borrower country will have to pay nearly 1.539 per cent of interest (SDRi+75 basis points) and a 0.25-percent service charge for receiving the IMF loan.

Meanwhile, the government is also searching for several other credit facilities from the World Bank, the Asian Development Bank and from some other lenders for minimising the budget deficit in the coming days.