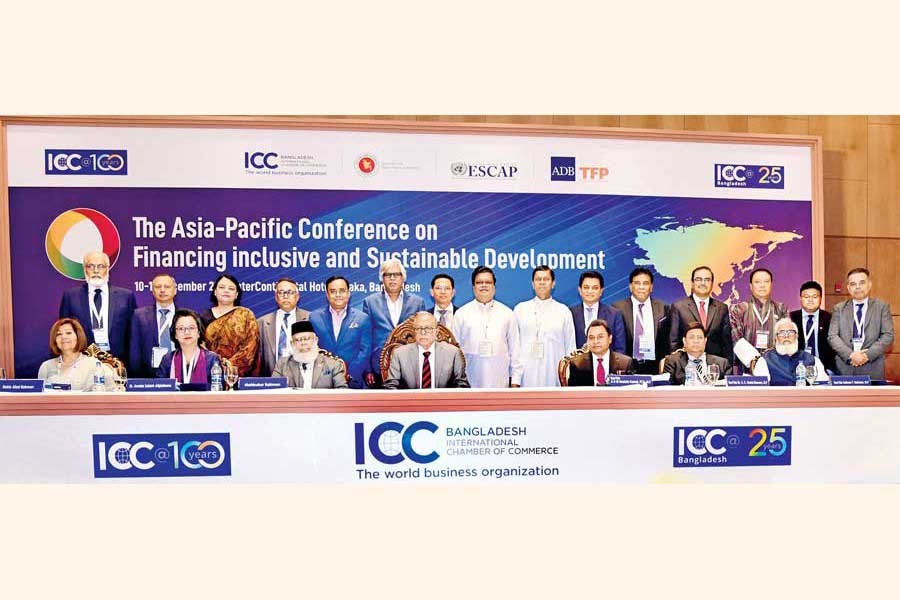 President Md Abdul Hamid said on Tuesday the main challenge for Bangladesh as well as other developing countries is to fill the financing gap before achieving Sustainable Development Goals (SDGs).

It is not possible for a single country to mobilise the required financing without active mutual cooperation among the nations, he said.

The President made the observations at the inaugural ceremony of the Asia-Pacific Conference on 'Financing inclusive and sustainable development.'

The International Chamber of Commerce, Bangladesh (ICCB) is organising the three-day conference at a city hotel in collaboration with the government of Bangladesh, the United Nations Economic and Social Commission for Asia and the Pacific (UNESCAP), the Asian Development Bank-Trade Finance Programme (ADB-TFP) and the London Institute of Banking and Finance.

The conference, scheduled for December 10-12, is being organised on the occasion of celebrating 100 years of the International Chamber of Commerce (ICC) globally as well as 25 years of the ICCB.

Under-Secretary General of the United Nations and Executive Secretary of ESCAP Armida Salsiah Alisjahbaba also spoke at the inaugural ceremony.

Speaking at the inaugural ceremony, Mr Hamid stressed the need for proper utilisation of resources to meet the development Agenda 2030.

He said the conference is a timely initiative taken by the Bangladesh chapter of the ICC.

He also focused on addressing the climate change vulnerability of Bangladesh.

According to the UNESCAP estimation, financing SDGs would require an additional investment worth USD 1.5 trillion per year in the Asia and Pacific region, which is 5.0 per cent of the GDP in the Asia Pacific countries, he said.

He said almost one-fourth of the time of implementing the 2030 development agenda has already been spent.

The LDCs would have to spend 16 per cent of GDP to finance the SDGs, he said.

This clearly suggests, in addition to national efforts, the regional needs to strengthen cooperation for facilitating the achievement of SDGs through adequate resource mobilisation for all countries in the region, he said.

About 100 delegates from 30 countries are attending the conference.