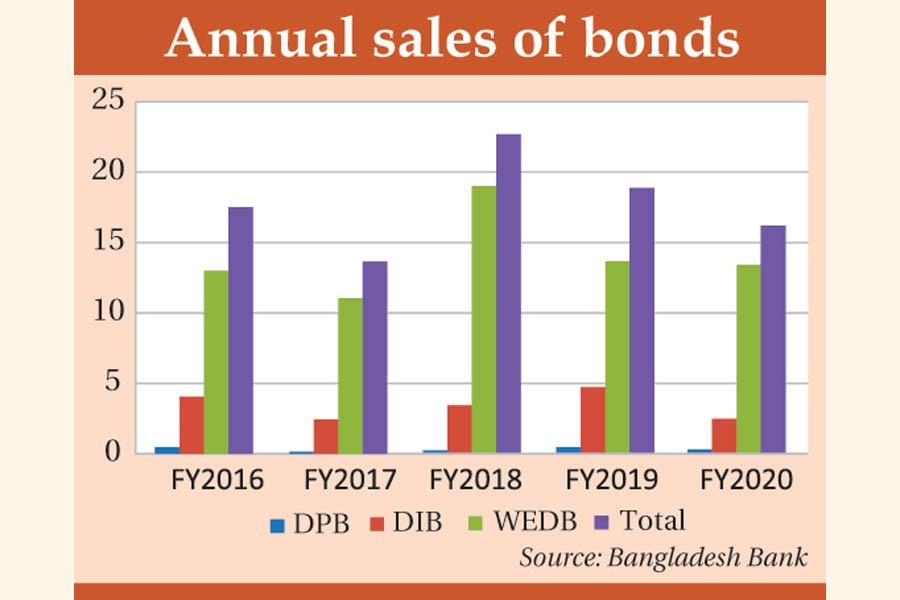 Bangladesh's bond market is under-performing as sales of major such debt instruments are on the declining trend, officials said on Monday.

The bond sales by banks to the clients fell in fiscal year (FY) 2019-20 compared to the last couple of years, they said.

Economists, bankers and buyers said the complex purchasing procedure, the absence of promotional activities and marketing and the lack of confidence are mainly hampering the growth in the country's bond market.

Among Bangladesh's bonds, the Wage Earners' Development Bond (WEDB), US Dollar Premium Bond (DPB) and US Dollar Investment Bond (DIB) are the major.

The sales of the bonds were even higher in FY2018 when the buyers bought bonds worth Tk 22.70 billion, the central bank said.

An FE analysis found in the last five years, Bangladesh's bond market has been volatile.

The central bank sells the three bonds among the non-residents Bangladeshis (NRBs) and their nominated persons through the authorised branches of different banks.

The NRBs can buy the bonds through their earnings abroad.

The government offers 12 per cent yield for the investment on the WEDB after five years' maturity.

It offers 7.5 per cent yield for DPB and 6.5 per cent for the DIB in three years' maturity.

Economist Dr Ahsan H Mansur said the lack of marketing and promotions among the NRBs is the key obstacle to the growth of the Bangladeshi bonds.

Besides, complex purchasing procedure, the limited selling agents abroad and USD exchange rate risk are the major challenges for promoting the bonds, he told the FE.

Senior country officer of the International Finance Corporation (IFC) Nuzhat Anwar told the FE it is difficult to grow the country's bond market with only three bonds among specific and limited customers.

"If you do not have several kinds of bonds with a wider angle, you cannot expand your market," she told the FE.

The lack of confidence in the market and the impact on the global remittance flow are the other reasons for the falling trend in Bangladesh's bond market, Ms Anwar said.

BB general manager Khurshid Alam said there are some challenges in the bond market development, which they are trying to overcome.

"The lack of promotion of the bonds among the potential customers is a big challenge. If we can promote among the NRBs, the bond sale will increase automatically," he said.

"Yield rates on three Bangladeshi bonds are competitive compared to the global market. But if we can do some reforms in the buying rules and procedures, introducing the online system could be more expanded at a higher rate," the BB GM said.

He said they need some reforms in the existing rules and regulations.

Splitting the denomination of the existing bonds, offering some non-monetary benefits to the clients like special cards for Bangladeshi airport pass, and allowing the sales by agent banks are important for the growth in bonds, said Mr Alam.