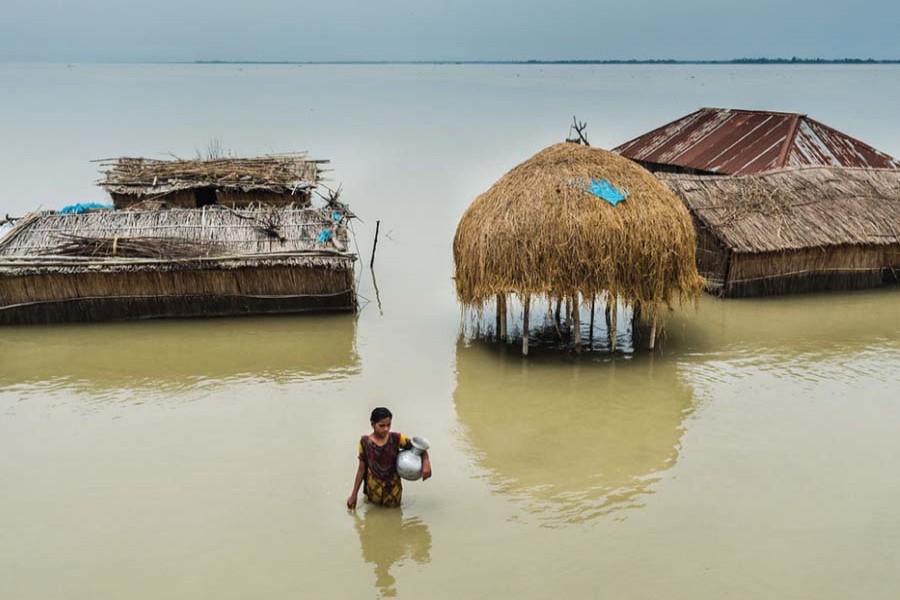 A woman affected by floods in Bangladesh wades through waist-deep water in search of clean water. (UNOCHA)

Bangladesh urged the developed countries to double adaptation financing to developing countries by 2025.

It also requested to establish a financing mechanism to avoid, reduce and address 'loss and damage' due to climate change.

It also urged to finalise the definition of 'climate finance'; and requested to provide assistance in the implementation of the National Adaptation Plan.

Bangladesh made the calls at the recently concluded United Nations Climate Conference COP-27, Bangladesh has played an effective and strong role.

The environment minister Md. Shahab Uddin said these things while addressing as the chief guest at a workshop titled "27th World Climate Conference (COP 27): Expectations and Achievements and Future Action Plan" at the auditorium of the Department of Environment on Tuesday.

There is a strong call for achieving significant progress in the 'New Collective Quantified Goal on Climate Finance' negotiations, with the aim of securing USD 100.0 billion per year until 2025 and securing long-term climate finance, said the minister.

The Environment Minister said that the 197 member states of the UNFCCC have reached a consensus on important issues including the adoption of the 'Sharm Al Sheikh Implementation Plan' on the morning of November 20 after long discussions.

He said the conference decided to create a new fund to address "loss and damage" in the most vulnerable developing countries.

A 'Transitional Committee' has been set up for COP-28 to 'Operationalise' the Fund and fix its 'Detail Arrangements'.

The minister also said that a decision has been taken to finalise 'Loss and Damage' in the conference, decide on its host and form an advisory committee.

Countries have agreed to take action on the 'Global Goals on Adaptation'.  The minister also said that 230 million US dollars have been pledged to the 'Adaptation Fund'.  Funding has been given importance for the implementation of NAP.

In addition, UN Secretary-General Antonio Guterres announced a $3.1 billion plan over the next five years to protect everyone on earth through early warning systems.

He said, "Sharm Al Sheikh Implementation Plan" has been accepted with congratulations by all the countries of the world, including the decision to form a new fund to address "Loss and Damage" in the more vulnerable developing countries like Bangladesh, but its successful implementation will depend on its proper implementation.

Under the chairmanship of Farhina Ahmed, Secretary of the Ministry of Environment, Forest and Climate Change Deputy Minister of the ministry Habibun Nahar and president of the standing committee on environment, forest and climate change Saber Hossain Chowdhury spoke as special guests in the workshop.

Half of GDP remains exempt from VAT