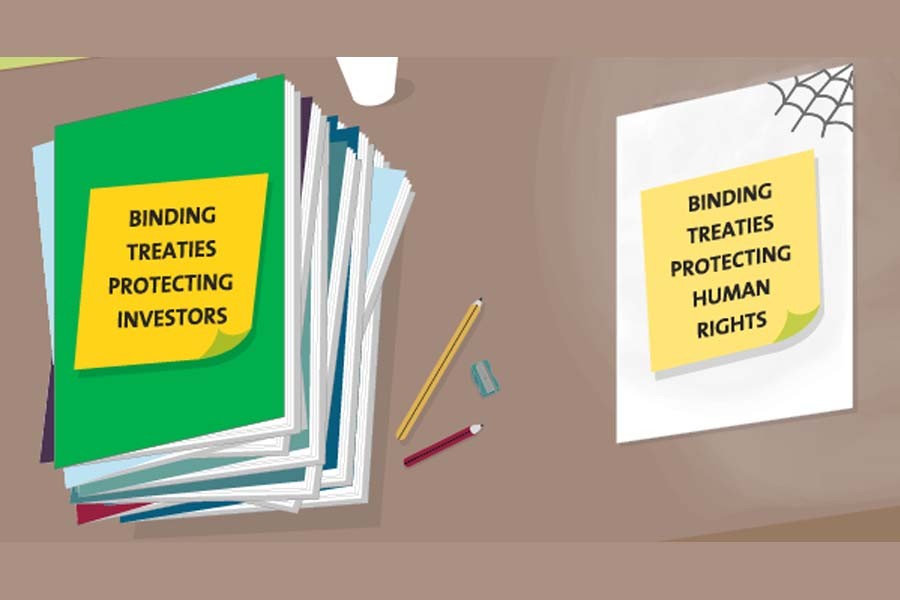 Speakers during a virtual consultation have suggested that Bangladesh should ensure periodic review of the UN-binding treaty on business and human rights.

They also called for involving three types of corporate sectors-national, transnational and state-owned-in the process of making it more effective.

Human rights violations are rampant in Bangladesh by various corporate entities in multiple projects for weak domestic laws, they added.

Bangladesh signed various global treaties but did not enforce those as yet for public welfare by formulating domestic laws in light of the international convention.

The speakers compared project implementation with 'kind of criminal activities' as they have no obligation to protect human rights, life, livelihood and nature.

The consultation styled 'UN Binding Treaty on Business and Human Rights' was hosted by Life and Nature Safeguard Platform (LNSP) with the support of ActionAid Bangladesh on Friday.

Mr Zaman said he was not much hopeful of benefiting from the signing of treaties as Bangladesh hardly enforces any international convention and those are on paper only.

But the consultation process like this is happening for the first time in Bangladesh before signing in October.

Bangladesh is the only country which needs this kind of international treaty as there are numerous examples of human rights violations in corporate sectors.

So, periodic review is required and three types of corporate sectors should be engaged in the consultation process as, in practical sense, corporate sector runs the government.

Corporate sectors have to understand that they have to comply with human rights to make their business sustainable, the TIB executive added.

He suggested incorporating three specific points in the second draft of the UN-binding treaty before finalising it in October.

First, businesses should be held liable for failure of human rights obligations.

Second, there has to be a process of commitment to disengage by investors in corporate sectors or public ventures who are failing to comply with human rights obligation standards.

Finally, there must be separate provision in the convention concerning civil and criminal liabilities of the corporates.

In any project, be it public, private or multinational, ultimately turn culprits as human rights, sufferings of the poor and environmental hazards are overlooked, said parliamentarian Mr Lutfullah.

The only way to safeguard from these criminal activities is to sign this kind of international convention or treaty so that it can be applied later by making a domestic law, he added.

"The governments' kind consideration is the foremost necessary thing to ensure human rights, save nature and poor people. Whenever we see a rail line or a bypass is being constructed, it goes through the land of the poor people whether he is sufferings by that or is the infrastructure benefiting at all is not considered."

The European Union or other developed countries which are active in enforcing human rights laws and environment protection do not bother what are happening in other poor countries in implementing any project by their corporate sectors, Mr Lutfullah added.

Besides, the absence of legal bindings makes the payment system non-transparent, he observed.

ActionAid rep Ms Wandia said most of the EU countries are not willing to go for this kind of convention as many multinational companies belong to those countries.

The EU thinks this treaty has held responsible multinational companies only and no local or state-owned corporates, she stated.

Many countries and corporate sectors are trying to keep civil-society organisations out of the process, but they raise voice on behalf of the victims and the marginalised, she added.