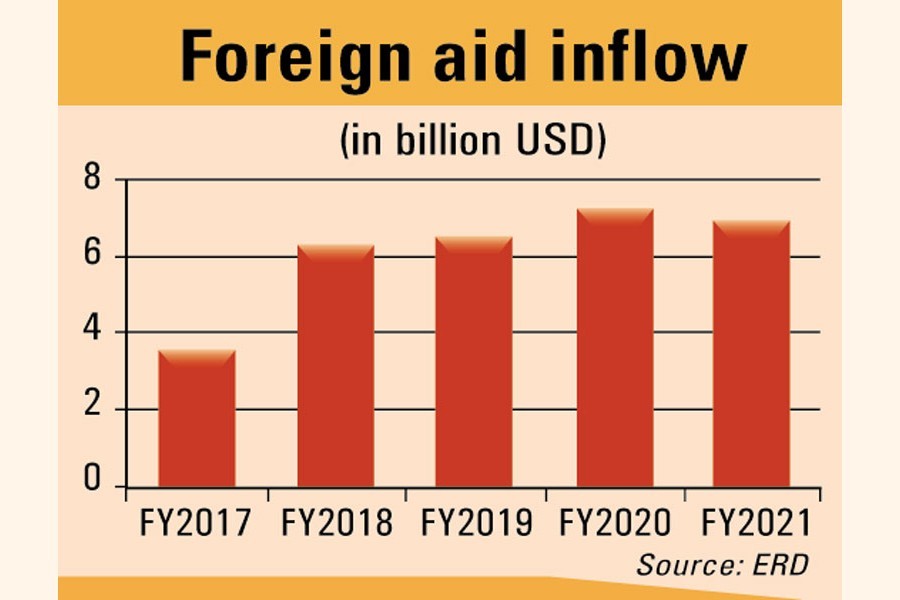 Bangladesh received US$7.11 billion worth of foreign aid in the last fiscal year (FY) of 2020-21 despite hurdles in execution of the foreign-funded projects amid the Covid-19 pandemic.

The foreign assistance inflow has again placed Bangladesh into the seven-billion-dollar club for the second consecutive year, officials said on Monday.

In FY2020, the external development partners disbursed $7.27 billion worth of assistance for the Bangladesh government, showed the Economic Relations Division (ERD) data.

The ERD latest provisional data, received by the FE on Monday, showed that foreign development partners made a commitment of $9.35 billion worth of MLT loans and grants for FY2021 - $205 million lower than that in the previous FY2020.

In FY2020, they confirmed $9.55 billion worth of foreign assistance for Bangladesh's development work, ERD data showed.

An additional secretary of the ERD, who did not wish to be named, told the FE that some budget support and better performance of the project implementing agencies in executing the foreign-aided projects had facilitated the satisfactory aid flow to Bangladesh even during the Covid pandemic.

"Our strict monitoring on project implementation by different public agencies has also brought a good result for the foreign aid inflow," he added.

Although the inflow of the foreign assistance was slightly down in FY2021 from that in FY2020 and a billion dollars lower than their annual target, the ERD official said, they were still satisfied with the received amount.

The government had set a target to receive an $8.32 billion worth of foreign aid in the outgoing FY2021.

"Gathering knowledge of the impact of coronavirus in project execution in the past, the agencies had utilised their experiences properly in the recent months amid Covid pandemic. It's really an achievement for Bangladesh," he told the FE.

Out of the total $7.11 billion disbursed assistance in the last FY2021, the foreign development partners, including the World Bank, Asian Development Bank and Japan, released $6.77 billion worth of MLT loans and $334.23 million grants, showed the ERD's provisional data.

In FY2020, they made a commitment worth $9.05 billion in loans and $502.28 million in grants for disbursement against different development projects and programmes in Bangladesh, the ERD data showed.

Aid commitment means the confirmation of loans or grants by the donors against any projects or programmes through signing deals with the government. And the disbursement means release of the committed loans and grants following the agreements.

When asked, another senior ERD official told the FE that as some budget supports, programme loans by the WB, ADB and Japan had been released and project implementing agencies utilised foreign aid in time, total amount of assistance had crossed the seven-billion-dollar mark in FY2021, like the previous FY2020.

Besides, some big loans including the ADB's $500 million for Covid preparedness, the WB's $1.0 billion for vaccine procurement and job creation, and Japan's $320 million budgetary support were signed during the last fiscal, he said.

As a result, the overall foreign aid commitment was in a comfortable zone, he added.

According to the IMED, the government agencies utilised foreign aid at a much higher rate than the local funds in the Annual Development Programme (ADP) during July-May period of the last fiscal.

The foreign development partners used to release their committed funds against different public sector projects and programmes in Bangladesh every year.

Meanwhile, the government made payments worth $1.91 billion funds during July-June period of the last FY2021, against the total outstanding MLT loans, the ERD data showed.

Out of the $1.91 billion debt servicing, the government repaid interest worth $496.06 million and principal worth $1.41 billion.