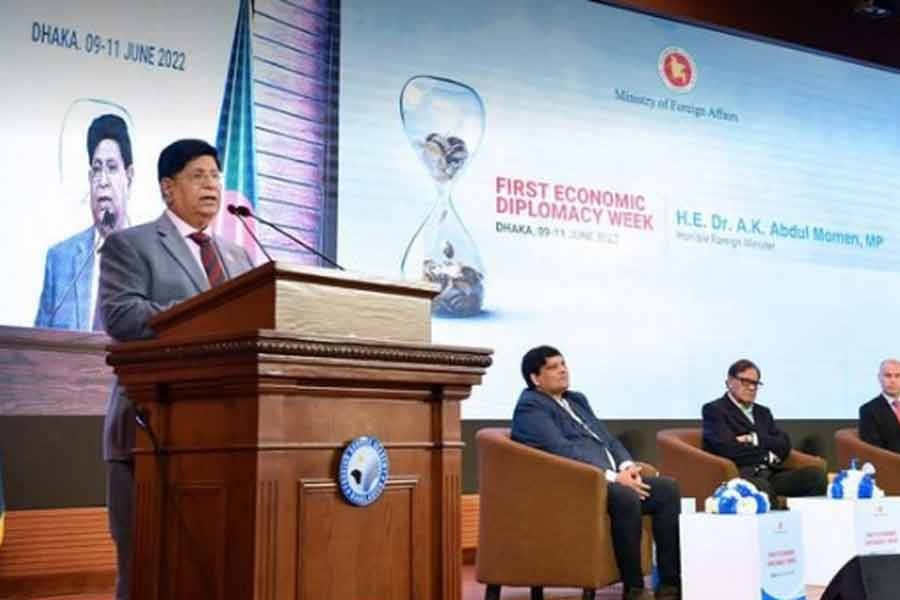 He said the foreign ministry along with all Bangladesh missions abroad timing up with the commerce ministry has been engaged in the process of finalising preferential and free trade deals with some countries.

"All of my colleagues and Mission heads have been advised to put additional efforts into achieving our goals of Economic Diplomacy," said the minister.

He said Prime Minister Sheikh Hasina has outlined a few roadmaps for achieving Father of the Nation Bangabandhu Sheikh Mujibur Rahman's dream of Sonar Bangla by 2041.

For Bangladesh, Momen said, Economic Diplomacy is more important as the country prepares for its transition from the Least Developed Countries (LDCs) group in 2026.

"This is also an important tool in our national efforts to achieve the 2030 Sustainable Development Goals (SDGs) and 2041 goals," he added.

The foreign minister said Bangladesh Missions abroad are working relentlessly to ensure post-graduation preferential access of Bangladeshi products to the large markets such as GSP+ facilities in the European Union.

He said Bangladesh's apparel sector is already on the move to gradually strengthen its backward linkage industries to achieve "double transformation" to meet the RoO (Rules of Origin) criteria of the GSP+ scheme.

As of now, he said, as much as 80 per cent of the country's exportable knitwear is already undergoing double transformation, while it is around 50 per cent for woven garments.

"Steps are afoot to diversify our export basket by prioritising sectors such as ceramic industry, ship-wrecking industry, cement industry, pharmaceutical industry and knowledge-driven industries such as Information technology (IT)," he said, adding that Bangladesh is now exporting robots to South Korea, ships to India and pharmaceuticals to Europe. Apart from being a booming domestic market, Momen said, Bangladesh is also a strategic hub linking India, China and the ASEAN countries.

"Today, Bangladesh has the most liberal investment regime in the region, characterised by a wide array of facilities, attractive incentive policies and consistent reforms," he said.

The foreign minister said 100 Special Economic Zones and 28 High-Tech Parks are being created to encourage investment and rapid economic development through increase and diversification of industry, employment, production and export.

He said the current government has implemented mega projects to accelerate the growth of industries and to take full advantage of our strategic location.

"Padma Bridge, the country's longest bridge is set to be inaugurated on the 25th of this month ... is expected to boost the country's gross domestic product by 1.2 per cent," he said.

The foreign minister said observing the first-ever economic diplomacy week is significant as it is being held in the context that the global recovery from COVID-19 is being made difficult by the Ukraine crisis.

"The crisis has shown us that, in today's interconnected world, an event anywhere affects everyone everywhere," he added.

Foreign Secretary Masud Bin Momen also spoke among others at the opening session of the economic diplomacy week.